dances in Vietnam that capture the magic of the country

Typical Dances in Vietnam varies as you visit different parts, You can hear many styles of music but there are just a few certain types of traditional Vietnamese dances, in which Vietnamese traditional dance plays an important role in the culture of the country. Until these days, counting on customs that are still maintained, and where culture is important not only in history, but also in music and dance. That is why below we will analyze Vietnamese Traditional dances, highlighting the diversity and richness that it possesses, having a great section regarding the Theater, being very present the Music of Ceremonies and being part of different rituals and popular festivals of the Vietnam.

The Vietnamese dances varied over time according to the customs of each Royal House in their respective mandates, generally being performed as an offering to the kingdom and in order to wish good fortune to the nation and the royal court, this base being respected even in present days. The influence of the West is present in the musical form known as Nhac, which brings the combination of tradition and culture of traditional music with a fusion of Western customs, even being interpreted by female voices. In dance we find movements that point more than anything to the dynamics and the great variation of styles and movements, preserving the classic ballet of the ancient dances of Hmong and Cham, while on holidays we find the appearance of the popular Lion dance , celebrated day or night depending on whether it is seen in the southern or northern region of the country. 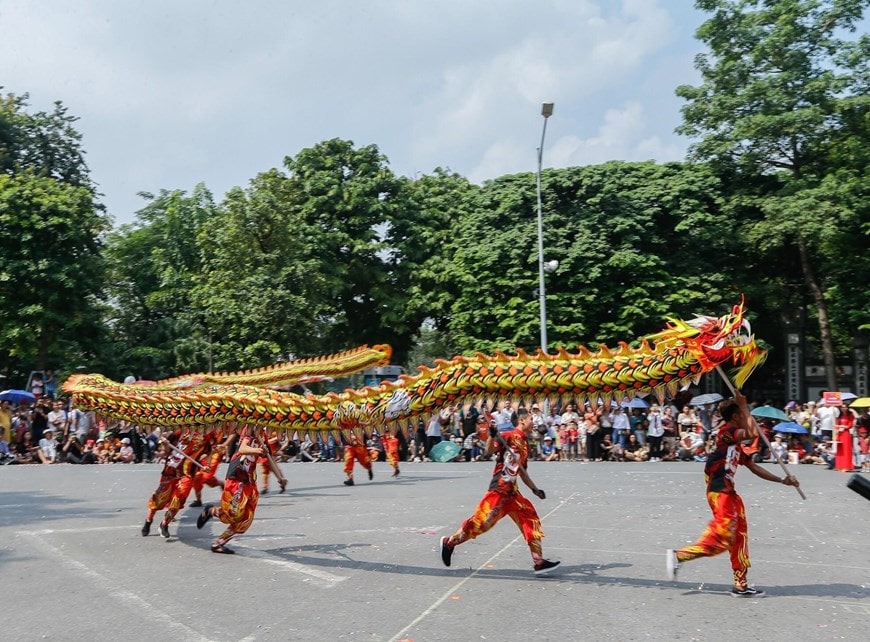 In Vietnamese Music and traditional dances, we find a high presence of string musical instruments, accompanied by different percussions and Drums that have well-defined structures according to the region where the dance is performing (dividing into North, Central and South Vietnam) It is logically influenced by the divergence of cultures in Vietnam, inspired by folkloric folk songs and logically by the geographical environment where this country is located, on the Indochina Peninsula, so we must think of a well-defined oriental style. Of course, there is also a presence in the western world, being frequent to find Jazz Clubs that merge the style of this musical genre with that of Vietnamese Traditional Music.

The Xuan Pha dances are folk performances that represent the arrival of five diplomatic missions to celebrate a great military victory for the Emperor of ancient Vietnam. According to the researchers, Xuan Pha is considered a dance that contains a lot of mystical information from the Vietnamese in the past, including numerous aspects related to the history of the nation, and plays an important role in the treasure of national music. 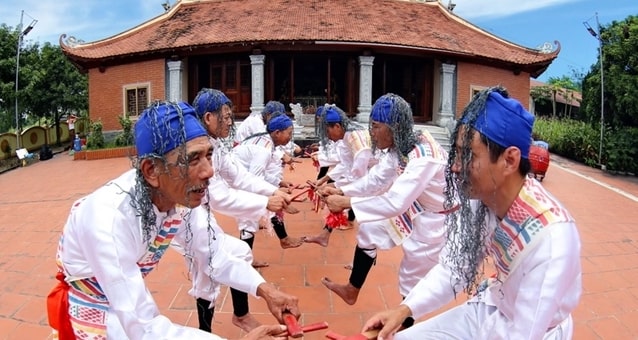 Currently, there are many criteria regarding the origin of Xuan Pha dance in Vietnam. According to the artist Bui Van Hung (Xuan Truong Commune, Tho Xuan District, Thanh Hoa), who has had great strength in preserving and conserving the Xuan Pha legacy, this show appeared in the Dinh dynasty (968 – 980). Local legend has it that Dinh Bo Linh was on his way to fight the last of the twelve warlords, named Ngo Xuong Xi, in Binh Kieu, Chau Ai (now Thanh Hoa province). They placed him in Quan Thanh and sent an envoy to ask for the support of the gods to defeat the enemy and unify the country. During his mission, the envoy was caught in a storm on the Chu River and had to take refuge in the Xuan Pha Temple.

To highlight the beauty of the lotus flower, worthy of being considered the national flower of Vietnam, the artists of the Bong Sen Theater in Ho Chi Minh City have organized and presented to the public a unique dance program called “Lotus Dance”. With its beauty and fragrance, the lotus flower is the icon of the beauty and purity of Vietnamese women and the spiritual and cultural beauty of this nation. For this reason, the artistic program is made up of a series of stories about this flower through dances and a traditional and modern artistic language. 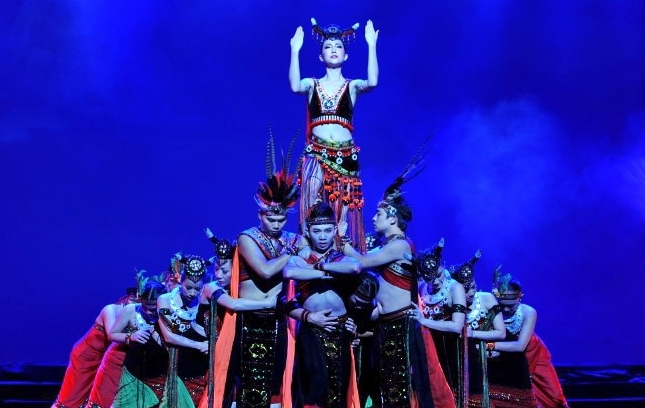 Vietnamese have always considered the dragon as s sacred creature, with extraordinary strength and a symbol of good fortune. In some Eastern countries, the dragon still symbolizes power and national origin. In Vietnam, dragon dances story back to the legend of the “Dragon Father and Fairy Mother”. Dragon dance has long been a peculiar culture of Asian countries, including Vietnam. Today, the dragon dance in Vietnam is a unique artistic manifestation of many people.

Recently, in the My Dinh National Stadium square, the Ministry of Culture, Sports and Tourism of Hanoi organized the “Festival of Dragon Dance Hanoi”, with the participation of 28 groups and 50 dragons from places in the city. At the festival, the participating teams provided numerous impressive and beautiful performances. Many dances showed difficult techniques with the combination of four sacred animals: Long – Ly – Quy – Phuong (dragon-unicorn-turtle-phoenix), expressing the fervor and talent of the artists and the public to preserve traditional culture. In addition to the ingenious techniques of dragon dances and familiar themes, the artists also put a lot of effort into studying, collecting and composing special dances, particularly those related to historical accounts and of deep spiritual significance, such as “An Duong Vuong builds the Citadel of Co Loa ”,“ Two dragons playing with pearl ”,“ Movement towards the dragon ”and“ Phu Dong with ascending dragon ”. 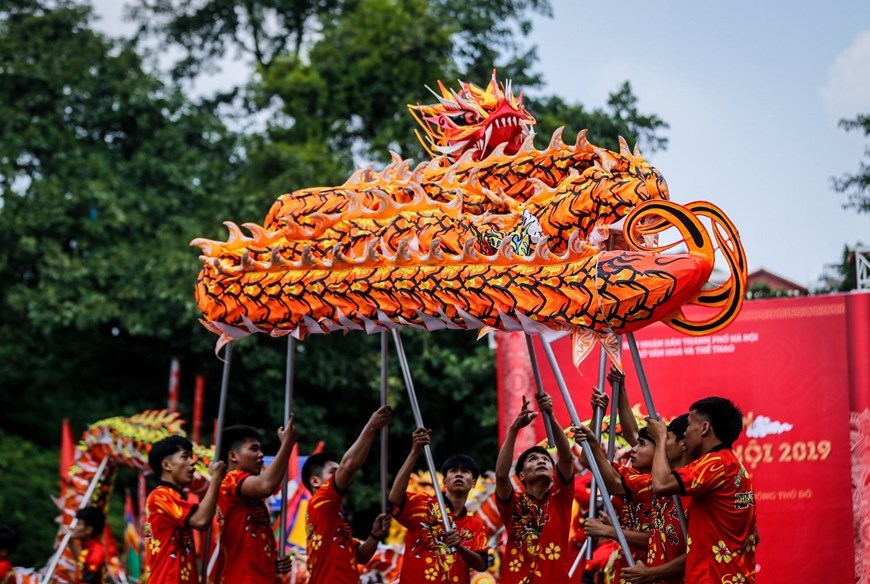 The lion dance is known in Vietnam as the unicorn dance (Vietnamese: múa lân) based on the mythical creature kỳ lân, which is similar to the Chinese Qilin. Most of the lions in Vietnam resemble the Lion of the South, they are part of the Chinese tradition of the Lion of the South, but they have acquired local characteristics. However, there are also different local forms that differ significantly in appearance and performance, for example, the lions dances of the Tay and Nung minorities. A court version of the dance is performed at the Duyet Thi Duong Theater on the ground from the royal palace in Huế.

The dance is mainly performed at traditional festivals such as the Vietnamese Lunar New Year (Tết) and the Mid-Autumn Festival (Tết trung thu), as well as other occasions, such as the opening of a new business, birthdays and weddings. The dance is usually accompanied by martial artists and stunts. A feature of the Vietnamese unicorn dance is its dance partner Ông Địa or the spirit of the earth, depicted as a large, broad-bellied and widely smiling man holding a fan of palm leaves similar to the “Great Chinese Buddha” (大头佛). The kind-hearted spirit, according to popular belief, has the power to summon the auspicious unicorn, and therefore, during the dance, takes the initiative to clear the way for the unicorn. Ông Địa’s comical appearance adds to the festive and joyous nature of the dance.44 The Vietnamese lion’s head is made differently because of its missing horn. This is because teams used to fight each other and resulted in the horn being constantly activated. To solve this problem, many Vietnamese teams have not asked for horns to make it harder for the opponent to harm the lion. 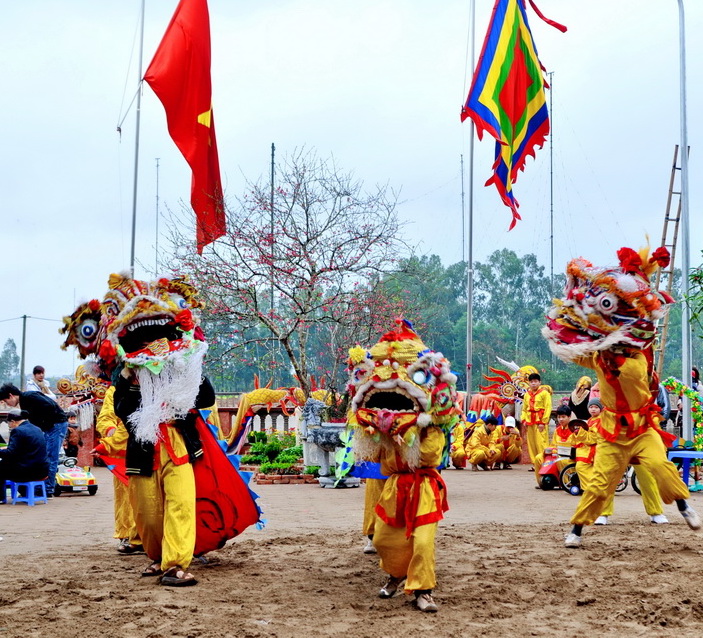 Múa bài bông, is an an ancient Vietnamese dance dating back to the Tran Dynasty. Tran Quang Khai created this dance to perform on the peaceful feast day of King Tran Nhan Tong. However, the other opinion is that the song Bai dance was created by Chieu Vuong Tran Nhat Duat. During the second resistance war against the Yuan-Mongol invaders, Tran forces captured Ly Nguyen Cat among Toa Do’s troops and she stayed to teach classical opera. The Prince’s mother gave birth to a mother who was fighting to learn. Cotton dance is influenced by classical music, meaning longevity with movements that show the scenes: giving peach and offering wine. The reunion dance of the Vietnamese spirit is associated with the Buddhist culture, merging with the development of Truc Lam Zen. 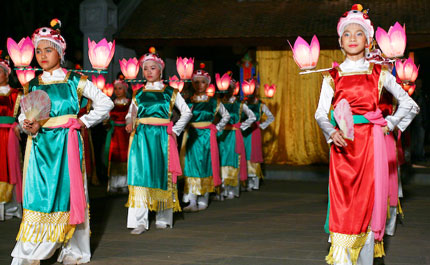 Múa xòe Tây Bắc is another folk dance and a a unique cultural activity and infant a popular dance among the Northwestern Thai ethnic minority of northern Vietnam. The spread dance also known as “Praises” (hand-held dance). Dance shows the friendly, close and collective solidarity, so all Thais know how to dance and love the spread art of the nation. Múa xòe Tây Bắc Dance is a valuable cultural heritage of Thai people with sustainable vitality among the people. Dance is a symbol of the love of the Thai minorities, from the love of hard working life, to the love of couples, Thai people often organize dancing in spring, season and wedding festivals. The Thai people have 6 ancient radiant beats, which is the origin of Thai folk dance. The most basic trick is “Catching a new hotpot towel” – meaning “raising a towel to invite wine”. This is the spread to express the culture in the communication behavior of Thai ethnic people. 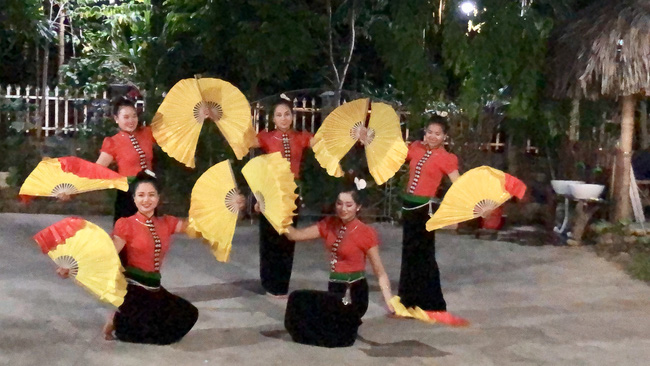 Bamboo dancing is called Nhảy sạp or múa sạp, is a dance related to the culture of people of all ethnic groups in South-East of Asia, such as Laos, Thailand, Cambodia, Philippines, Borneo Island in Malaysia. Ethnic groups in Vietnam often organize dance on festivals, festivals, such as the season, the Lunar New Year or on the moonlit nights (Kho Mu people in Dien Bien).

In fact, Bamboo dancing is performed by many Northwestern tribes in Vietnam, especially during festivals. This shows that, regardless of originating from any ethnic group, its spread is very large, showing strong attraction, and at the same time, high community, easy to popularize. This dance is also performed by the Kinh people, which also attracts many participants. From the dancing sessions to celebrate the victory of Dien Bien (May 1954) between the army and the people, the stall dance has been artized, appearing in many stages, performances, following the Vietnamese art troupes. abroad. 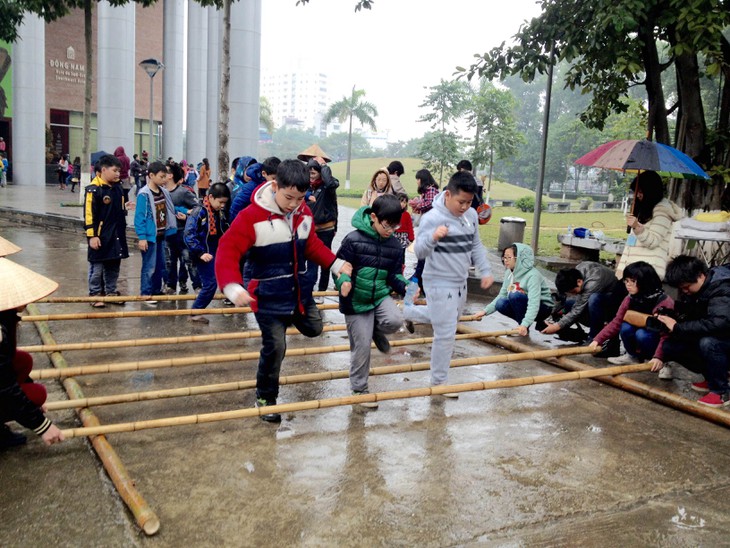 Ballroom dance is become very popular in Vietnam, as we know, this dance is originated in Latin America, but by now Ballroom has become popular all over the world. When referring to Ballroom, we often refer to chachacha, tango or slow foxtrot. When dancing ballroom, the trainee will be fully developed physical characteristics such as: speed, strength, strength, endurance and flexibility. The training process will also give you the body to have a balanced beauty, fashion and very charming.

Besides Ballroom dances in Vietnam, street performances are also a new trend, you should not ignore Latin dance. These Latin dances are originated from Latin American countries like Cuba, Colombia, Brazil, … It is known as hot dances with body movements based on latin music such as Samba, Reggaeton, sala, cha cha, … These dances always give people the feeling of excitement and always want to dance to each tune.